At GameSub, we STRONGLY believe that Gaming should be for ALL. It didn’t matter if you are playing your Nintendo SWITCH on your way to work, or looking forward to SMASH Bros session with your cousin, or simply a pro gamer who are ready to kick some noob **s. Everyone should have the universal access of gaming, and price should never be the hurdle you need to jump through in order to get one. That thought of UNIVERSAL access, is the very DNA of GameSub. It was an idea in which we believe that technology and innovation will allow us to PLAY MORE. To do that, we have painstakingly doing whatever means to talk to our customers or would be customers on how we can add value to their gaming experience.

As a result, we recognise that the PRIMARY obstacle of stopping anyone from playing MORE game is really about the PRICE $$$ (it is that simple and hard). In Malaysia, the average game cost between RM 150-RM 250, while the console would go as low as RM 900. Sounds familiar? (Hint: The Printer Business Model), you sell expensive cartridge to make up the cost of the machine that is needed to be play on. Which makes it extremely hard for you and me to own more games (4 game titles can easily make up the cost of buying another console)

Which is where we come in, we want to offer EASY and UNIVERSAL access of game selection for all. But how? - this is where GameSub comes in.

Ultimately, what we are offering is a Subscription Service (just like Spotify or Netflix of the world), which you are able to PLAY thousands of GAME at one LOW PRICE. By doing so, we are able to : 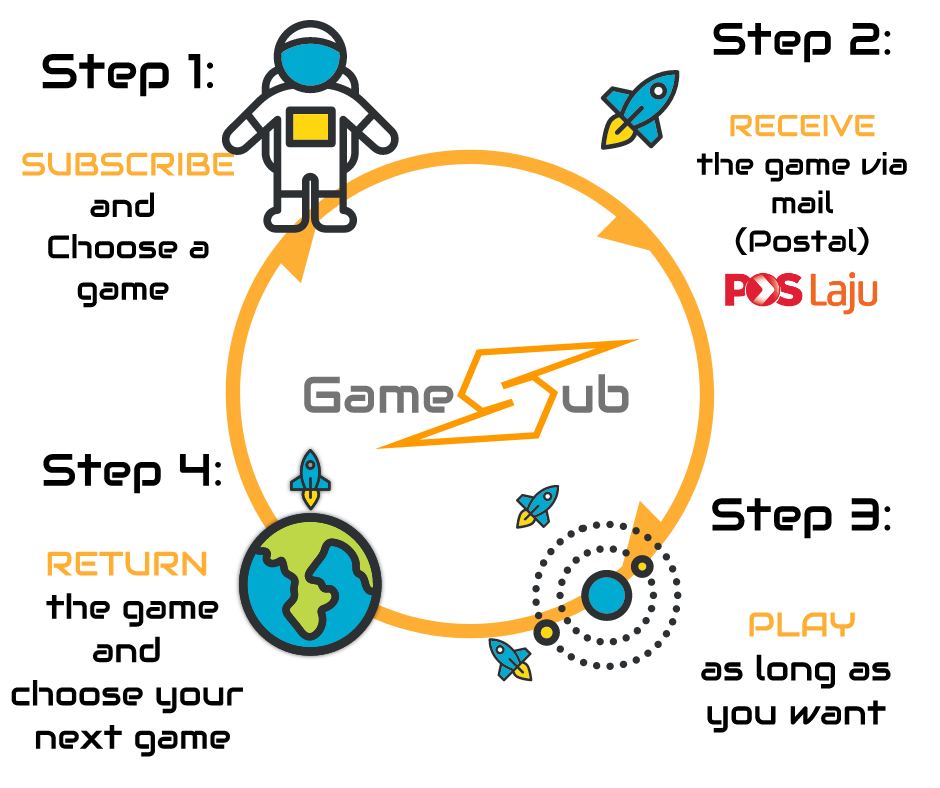 However, we are not:

Of course, this is by no means a REVOLUTIONARY solution, or we are about to change the world, and we don’t think that is what we aim to be. To put it simply, we just want to make owning a game as easy as ordering a pizza. Think about it, before Pizza was mainstream, you would actually need to walk in a diner to get one, sit down and pick. Fast forward now, it’s easy and affordable with just a few clicks.

We’re just getting started, and we have a long way to go. Like a rocket about to be launch, we’re still at a testing phase, using whatever means to get our rocket ready for launch sequence, from identifying the right rocket fuel, to hiring the best engineer we can think of. It will be a hard and treacherous journey, and we will encounter A LOT of fail launch and skepticism (Our worst enemy). But if we are absolutely honest with ourselves, we have every reason to fail, but that’s not stopping us from looking for the right formula to launch this ROCKET, because, from here on, we can only go UP. And here’s a brainy quote to end the story from my favourite astrophysicist/story teller of all time.

The Sky Calls To Us - Carl Sagan

So, with that being said, we hope you LOVE this story about GameSub. #PlayMore

A Carl Sagan Nerd? Check out My Fav clip HERE